As the city started to flood, he posted a video online with a simple message: Come on over. He gave out his personal phone number. And hundreds of people streamed in.

When some of the storm's victims couldn't make it across flooded streets, McIngvale dispatched his large delivery trucks and drivers to collect people and bring them to safety.

"We put out a Facebook feed that we were going to rescue people, because there was so much need," he says. "The city and the local authorities did a great job; they just couldn't get to all the 911 calls."

McIngvale says he is at capacity — he told NPR's All Things Considered on Monday that 400 people were living at both of his stores. He has done this before — during floods last year and when Hurricane Katrina hit 12 years ago. He built his stores on elevated concrete to make them floodproof. 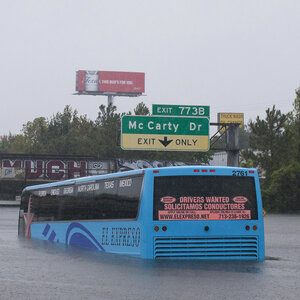 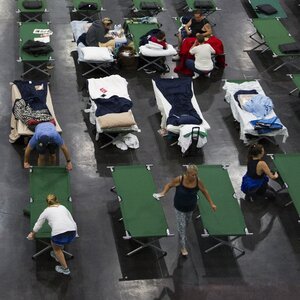 McIngvale also has food for the evacuees — and he invited them to bring their pets, too.

"Think a slumber party on steroids," he says.

A slumber party — or maybe just a safe, dry place to wait out a record-setting storm.